You are here: Home / Rants and Raves / Speed Bumps, Hills and Mountains in East Africa

Twenty years ago I used to push trucks from Mombasa to South Sudan.

The main roads at that time were in pretty bad shape. We used to drive the trucks with one side off the road and one side on as the shoulders had been eroded to a state where there was just a thin strip of tarmac. Two vehicles couldn’t share that space very easily. Some tried and failed.

Minus the lengthy border crossing, on the whole, it used to take us about three days to complete the haul from the coast to Kampala.  About 1,200 kilometres.  That was with a convoy of fairly underpowered trucks dragging trailers behind with about 35 tons on.

I didn’t think that was too bad at the time considering the trucks and the roads.

Recently I revisited the trip but this time in a Discovery V8 3.9 efi.

It took us a grand total of 24 driving hours. It was then that I came to the conclusion that to trip plan any journey in this region you had to factor on an average speed of 50 kph.  Remember this is on the main artery that serves the rest of the East African interior. Main highways.

One factor is the increase in traffic volume. The railway has been inop for a while now.  All goods go by road. You can pretty well factor in joining a truck convoy 1,200 kilometres long. 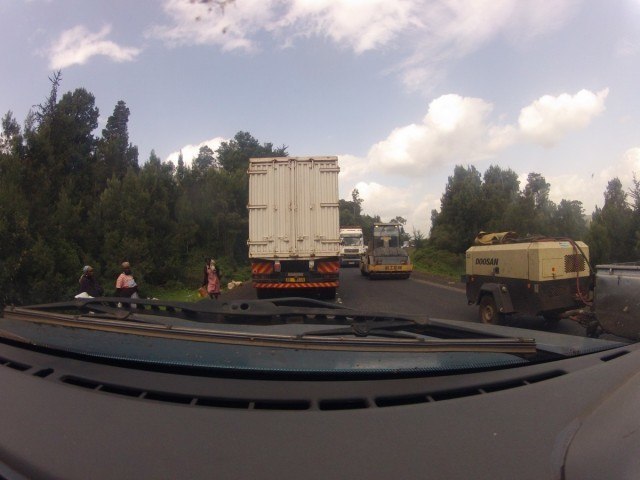 No matter which route you take it’s traffic, police checks, a meteorite storm of potholes or the amount of traffic “calming” measures that have been put into place.

There have been major improvements in road infrastructure over the recent years but with that has come the emergence of the dreaded speed bump. Speed, quite rightly, has to be controlled but to what extent? There are those who don’t want or don’t know when to slow down.

In my view the amount of speed bumps and the way that have been constructed are having a negative effect on everything to do with road safety and eco-driving.

The road on one bit of this journey has just been finished. Before it was completed you could cruise down the stretch at a good constant speed, say, 80 to 100 kph. You could overtake slow moving vehicles, there was traffic flow, happy motorists, calm motorists even.

Now that piece of road has been finalised, speed bumps put in, we’re now back to 50 kph average, long tail backs as slow moving vehicles get caught up together, no traffic flow, impatient drivers overtaking dangerously and stressed drivers. Bad combination.

Over the next few months I am going to write about and include pictures of the types of hump, bump, hill or mountain that can be found on East African main highways. Ranging from the mild to the extreme, that have been put in by road safety schemes and the home made.