You are here: Home / OnCourse / In Memory of 2 Valued OnCourse Employees 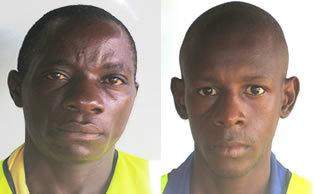 January the 16th 2009 will be a date remembered by all OnCourse staff. Two of the team lost their lives to a tragic Road Traffic Collision.

Ronald Kato and Wilfred Tamale had finished work and were on their way home and going to the market /get a hair cut respectively.

They reached the Kitende junction on Entebbe Road and as they were entering, the bicycle they were riding was hit by a 4wd vehicle. Kato was killed instantly and Wilfred died later that evening, in Nsambia hospital, of head injuries.

Our thanks go out to the hospital staff for trying their best to keep him alive and making him comfortable in his last minutes.

These two valued members of the OnCourse team were young men and leave behind young families. Families that now do not have a main income.

This is the tragedy of road traffic collision death. OnCourse preaches road safety and safe driving habits in all that we do but when an incident like this happens on your doorstep it really drives it home.

That particular junction has been highlighted as a collision black spot. Last year 8 people lost their lives at that junction alone. This year so far the tally is two.

I’m not sure of the fatality figures for Entebbe Road as a whole but it has to be one of the most dangerous roads in Uganda with respect to how long it is. The road itself goes through developing trading centres and the junctions at these centres are busy places with taxi and boda boda stages. This should be ample warning to vehicle users to approach them with caution. But as usual drivers make dangerous assumptions and keep on travelling at too fast a speed.

I’ve forgotten how many times I have been overtaken while waiting to turn right at the Kitende junction. Also the junction is on the brow of a hill!

OnCourse has decided to request permission to put in two white crosses in a safe place at this junction as a remembrance to Kato and Wilfred and hopefully as a warning to other road users that this junction is dangerous.

White crosses are designed to give motorists a first-hand reminder of the potential dangers involved with driving and to target crash factors such as speed, inattention, inexperience and drink driving.

They use this road safety system in the U.S., Australia, Canada, etc to highlight hazardous areas. It has been, I believe, quite effective. It is know by various names including: Roadside Crash Marker Program, Highway Fatality Marker, and White Cross Memorial Marker Program.

I hope we won’t have to add any more at this spot over the coming year. But then again I’m sure we will.