You are here: Home / 4wd Vehicles / Considering the double cabin pick up (dcpu)

When talking of the double cab pick up (dcpu), most of us in this region automatically think of the Toyota Hilux. The first 4×4 double cab version was made available in South Africa in 1984. I’m sure that any 4×4 enthusiast remembers the original leaf sprung model. Its robust reliability spoke for itself. It was a good, strong, simple vehicle. This made it popular with UN and other humanitarian organisations and commercial enterprise. This is the model that the gang on Top Gear tried to kill through various different methods.

It produced a great compromise between a passenger vehicle and a pick up. It became an icon and the most popular choice of bakkie (Afrikaans) in South Africa to the Ute (Utility) in Australia.

It had a tendency to roll over if driven badly and was wrongly blamed for many a death/injury of UN agency and humanitarian staff. In my opinion the vehicle behaved well when driven on unsealed roads correctly.

Rumour has it that Toyota changed the front suspension design to independent after a threat from the UN that it would stop purchasing their vehicles if they did not make them less likely to roll over. Although I would like to think that was true, I think it’s one of those myths that go around. Anyway, the commercial sector has so much more purchasing power than the UN.

The change in design did make the Hilux easier to drive but did have an effect on it’s off-road capability and robustness. The vehicle handled brilliantly on unsealed roads with H4 engaged. This took away the chances of the empty back end swinging around on rough and corrugated roads. Cornering was now a pleasure. There was no over-steer or under-steer to worry about, it was fairly neutral. You felt safe in it as long as you didn’t go too fast of course.

This great compromise led to the majority of 4wd manufacturers coming up with their own versions. All pitting for the same market. Trying to outsell each other with different features. Great for the consumer. But which one to buy has now become something of a debate. Everyone seems to have an opinion on which one is the best. Including me. 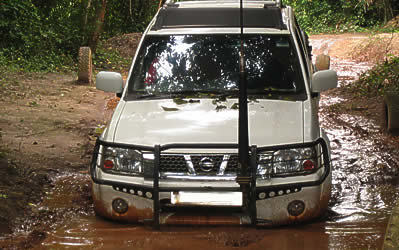 Land Rover even came up with one. It was dubbed the Tomb Raider after the one that was used in the film. It didn’t have much success though as with the majority of the Land Rover range these days. It seemed that after decades of development (or not) they still couldn’t make one that didn’t leak and cats could not still escape from when locked inside.

Anyway, the Japanese (purveyors of reliable vehicles with little personality) cornered the market again. Ford has had a pretty good bash at making one with the Ranger but it still is not as popular as its Asian cousin. 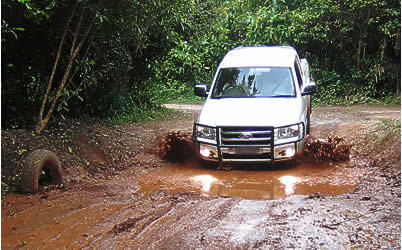 So, enter the new Hilux and its fight to keep supremacy in an ever increasingly competitive market. Well, in my view they made a bit of a hash of it. Yes, the low centre of gravity makes it less susceptible to roll over but it lost a lot of its off road capability. In some areas it’s being offered with a lockable rear differential to compensate for this. Also, as with the majority of other double cabin pick ups, it under steers.

With my job I get to drive the majority of 4wd vehicles that are on the market in this region and we do put them through a fairly stringent test as the drivers have to understand the limitations of their own particular vehicles. One of the exercises we do on our High range course, for example, is the slalom (weaving in and out of traffic cones). This doesn’t sound like much fun but come along and do it and you won’t want to stop.

We slowly increase the speed at which the exercise is done and we get to a point where for one reason or another, the driver doesn’t make it through the exercise. One the main factors for the DCPUs not making it are under-steer.

Now, under steer is built into a vehicle as it’s deemed to be easier to control than over steer. All you have to do is decelerate rather than counter steer as well. But why make it under steer so early? I can understand that if you are driving on a tarmac road (have adhesion going on) with all your lane to play with then under steer would be easier to correct. But in this region where 80% of roads are unsealed (no adhesion) which are narrow and lined with, at times, severely negatively cambered shoulders; having a vehicle that under steers early may lead hitting that negative camber before having a chance to decelerate leading to disastrous consequences.

The under steer is there whether the vehicle is in H2 or H4.  Although in my view it’s more apparent in H4 which is a shame as H4 is supposed to give the driver more control in circumstances like this!

It’s a sad day when I can take my old high center of gravity Defender through the slalom at the same speed and not lose control but this is what we get with the majority of DCPUs.

Before I give my opinion let me say that I have been doing some promotional work along side the Nissan dealer here in Uganda and it is having no bearing on my opinion.

There are some that I haven’t mentioned (Wingle Great Wall, I’m not going there!); but I just wanted to cover the most popular ones.  Is it a coincidence that all the under steers are turbo charged engines and have fairly wide tyres (read less tread focus when driving on unsealed roads)? 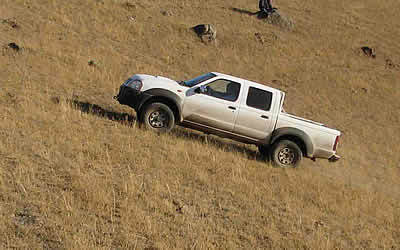 In my view the J83 model goes back to simplicity, which for this driving environment is ideal. No electric windows or central locking to fail in the field. No flimsy plastic to vibrate loose. A good, reliable normally aspirated diesel engine that still gives adequate performance and relatively good economy. It handles well on and off the tarmac. It has a lockable rear differential to compensate for its lack of off road capability.

But it still is not as popular as it should be and the answer to that it has no bling value. Along side its J86 sister and the Hilux it looks pretty mundane, no personality whatsoever. But if I had to get more bang for my buck and want a simple vehicle for light duty field work this would be my vehicle of choice.