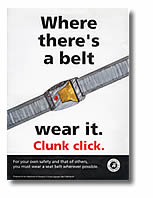 Convincing folk to wear seat belts has been a big issue for me over the last ten years of being a 4X4 driver trainer. Some people come up with the most ludicrous excuses not to wear them.

I asked one expat, living here in Uganda, why he doesn’t wear his seatbelt. And he replied, because he’s a better driver than all the nationals! If we take into account that the emerging nations have about 80 percent of the global death tally from road traffic incidents his rationality seems a little shaky!

When I first came to Uganda driving was described as a series of near misses, or Muzungu kissing, as one national driver called it. Unfortunately it’s now progressed into the full on Glaswegian type.

Wrong information is given out by people who think they know what they are talking about. For instance, I heard from some drivers and aid workers that they were told not to wear their seat belts because they are working in a hostile environment. This wise piece of advice was given out by the so called security officer of the organisation! What nonsense.

If we look at any hostile environment where aid workers are working we’ll find that one of the largest cause of death and injury is from being involved in a collision, not being shot at. Or, even having to evacuate the vehicle under cross fire for that matter.

But one of the most common excuses I get for not wearing seat belts is that people are afraid of getting stuck in a crashed vehicle with seat belt jammed and, if we take it to worse case, can’t open the doors with the vehicle on fire. 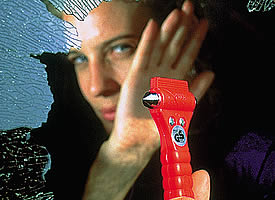 Enter the Life Hammer; a simple piece of equipment that can be placed centrally in the vehicle so that all occupants can reach it. It cuts belts and breaks windows. Be aware that it will only break toughened glass, i.e. the side windows of most vehicles. These have come under some criticism because the hammering part has to be done quite aggressively and may take repeated hits to break the glass. 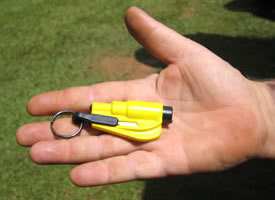 A piece of equipment that I’ve found to be very effective is the ResQMe.
Made by the same company as life hammer but, in my opinion, a lot more effective. It’s got a sharp shielded blade which slices through belts easily and when you press it against the side glass, in the corner, the glass just shatters from the spring loaded Glaswegian being released. And then it resets itself; ready to be used again. And it’s a key ring! And it works.

I recently and successfully tested one whilst on a first responder (First person on scene) course in the UK. And no, they didn’t teach me how to steal someone’s jacket whilst they were trapped inside the vehicle.

For peace of mind well worth the investment. Just don’t test it on your own vehicle!

And belt up – it makes sense.