Central locking system in this one failed. Seems that some systems cannot take the rigours of African road conditions. Or they may just be poorly refitted/fitted when the armouring was carried out. 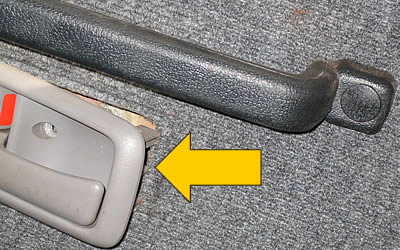 This one had been to a workshop to be fixed and this is how it came back. Security compromised?

Emergency tool kit found behind this panel in the rear of the vehicle. Needed a Philips screwdriver to undo the panel. Guess where it was found? You got it! I was told that the panel is generally left off to access jack and other emergency tools etc. The panel is part of the armouring! Security compromised? 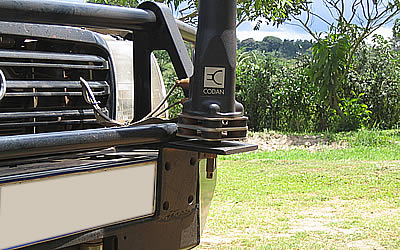 Not much thought given to this HF antennae modification (maybe the radio fitter?). For one it’s a killer. Not such a bad thing if it’s the right target but statistically speaking it would probably be a child running out in the road who gets it.

Also the bull bar (which is a really nice one) is supposed to protect equipment not make it more vulnerable! The HF radio is probably fitted to help with communication in remote environments – I would want it to work … if the aerial gets damaged …?

As an alternative solution, the company that makes the bar (ARB) also makes a rear bar with a spare wheel holder and the ability to mount the aerial high up at the back of the vehicle.

Another example – spot the faults … 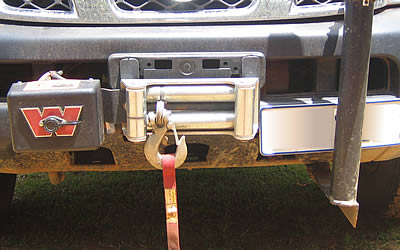 The HF mounting was made a local Jua kali shop. (slang term for metal workers associated with Mango trees)

Plus poorly fitted winch in my opinion:

BTW, Who’s Going To Fix It? 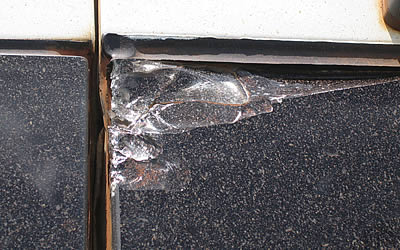 This vehicle went in for repair! The guys did a cracking job though. Apparently the locking system had failed and they tried to jimmy the door open. Vehicle was still being used.

I didn’t get a picture of this one, but an organisation operating in this region imported a 4wd from one of the better supplier of armoured vehicles. The vehicle was well kitted out and batteries were protected. The company had fitted a cut off switch in the engine compartment so that batteries could be disconnected.

Unfortunately, the organisation was not aware of the cut out switch and when they received the vehicle of course it wouldn’t start .

Instead of contacting the supplier, they sent the vehicle off to the guy under the Mango tree who decided to “rewire” the main electrical system.

Anyone who’s worked in developing countries will know what I mean. Anyway he did manage to get it started but at the same time blew a few fuses. Repair was carried out to these fuses by wrapping some copper wire around them and off the vehicle went. Fixed. Right. Not long after the repair, I believe it was probably a few minutes, smoke stared billowing out of the bonnet and luckily the engine fire extinguisher worked when the driver pushed it.

Of course both batteries were then damaged. These were the special expensive ones that are little bit smaller than the average ones. The battery boxes were too small for the new batteries and it took, by the looks of things, a rather large sledgehammer to make enough space for the new ones which are of course now not secured in place!

So even if you do buy the best make sure you have a good plan as to who will maintain it /and do the repairs.