Over the last few years of doing armoured 4wd training I have come across some good modifications, but mostly bad. The bad ones mainly affect the off road capability, and therefore, the ability to pass through the environment that the vehicle is supposed to.

The following is a gripe about having free wheeling hubs fitted. In general, they are pretty much a waste of time in an environment where you cannot cruise safely at highway speed. And 80% of the roads are still unsealed.

Recently a client brought their AV to a training course so as they could familiarise themselves with it’s operation. On one of the exercises we teach changing into 4wd on the fly, which I believe is an important technique, allowing the driver to exit a sealed road onto an unsealed road and change into 4wd High.

Whilst demonstrating I found that there was a resistance (and noise) from the transfer case.

The vehicle in question had covers over the front hubs which in my experience means that normal hubs are fitted. But on investigation I found free wheeling hubs underneath in the free position. After setting the hubs into the locked position we were able to complete the exercise. 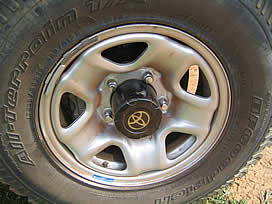 Some armouring companies put a set screw through the hub to lock it into the lock position. 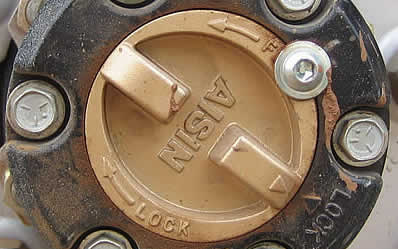 But why not just take the bloody things off and fit normal hubs that don’t give the option of the free setting?

I can’t understand why the modifiers of 4wd vehicles to armoured don’t do anything about the mirrors. It seems stupid that to re adjust them if they go out of position, you have to stop, open the door, get out!! Now Mitsubishi 4wds are not a great favourite of mine but on some of their models they fitted, what seemed like at the time, some gimmicky electrical mirrors that allow the driver to fold them in and out as well as adjust from the inside. Surely this type of system would be useful on an Armoured 4wd. 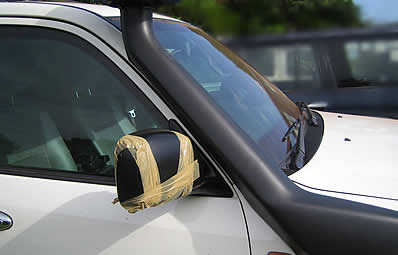 The fitting of some off road protection equipment is, at times, poorly done or not given much thought at all. Below is a sump/steering guard fitted, aptly named by one of my colleagues as the “chocolate fire guard”. We took the vehicle off road into our Low Range driving section and this mod enable the driver to get it bogged down quite easily! Not what you want from a vehicle that is supposed to be used in a harsh and hostile environment. 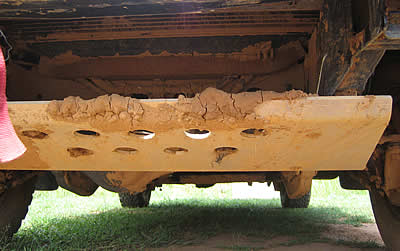 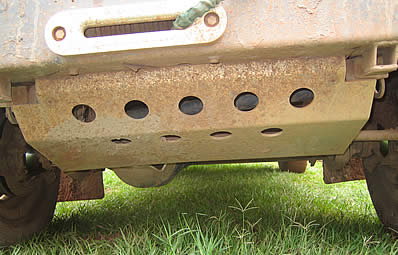 Another bad one below. Refitting of the spare wheel underneath the vehicle after the armouring has been done in this case reduced the departure angle so much that the vehicle could not pass through the first exercise in our Low Range course! We had to take the spare wheel off and leave it aside as putting it in the back loose would have not been safe.

Also, thought should be given to the type of environment that these vehicles maybe going into. In this case, the vehicle is expected to go to harsh, possibility hostile and certainly remote environment. A 2 spare wheel option was not even considered.

There are great rear bars (most people only seem to consider the front of the vehicle) made for vehicles that can accommodate 2 spare tyres. And HF antenna mount (another rant on that one to follow). Look through the ARB site for these. 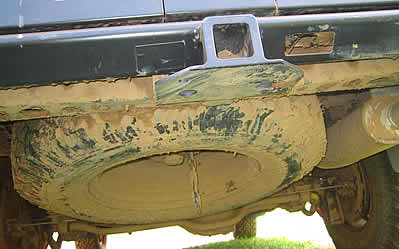 This a particular modification that I did like though. Batteries were relocated to the rear of the vehicle behind an armoured cover. Batteries that were fitted were the sealed type. And yes the loose items in the back of the vehicle were noted and commented on – the client was advised on the use of tie downs and cargo nets. 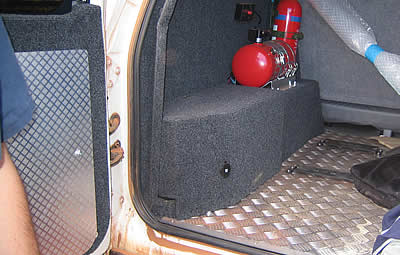